PWM and PPM are two common words used in the R/C industry. PWM stands for Pulse Width Modulation and PPM stands for Pulse Position Modulation. Some devices that use PWM for control are ESC’s (electronic speed controls) and servos. PWM is a technique used to relay data in the form of a varying pulse width.

You may be already familiar with binary, 1’s and 0’s; where a 1 is represented as ‘on’ and a 0 as ‘off’. An example of this would be a light switch. Turning the switch on would indicate a 1, off a 0. In the case of a PWM/PPM signal, a voltage applied indicates a 1 and vice versa. However, in the case of R/C electronics this ‘on/off’ data is not enough, this is where the pulse width comes in. 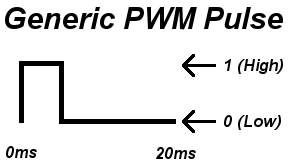 So what is the point in waiting up to 20ms? This is an R/C specific and will help understand PPM. Again, PPM stands for Pulse Position Modulation. PPM basically is several PWM signals lined up back to back. A PPM frame looks like this:

Aside from the gaining servo holding power, the reason for the 20ms frame is just having the ability to line up several PWM signals in the same frame. Like I said before, the time the pulse is on is what is important because we are able to strip out this relevant data from a PPM frame to re-generate a PWM frame. For example, if a radio only sent 1 PWM signal at a time, it would take 20ms per channel. If you have an 8 channel radio each update would take 160ms. The same data can be packed into a PPM frame and only take 20ms per update. Transmitters and receivers are the two most common R/C devices that use PPM.

The following are lists of common devices that use PPM and PWM.